Snorkel in the pristine waters looking at unspoiled coral reefs, walk on top of a floating glacier, watch fresh lava cascading into the ocean, or stand inside a volcanic crater while gazing at the milkyway galaxy – all of this without having to worry about carrying your passport if you are a resident of the USA. We are going to share travel stories from the territories and islands outside the continental United States to help you live your dreams and strike off bucket list items.

Before embarking in your journey to the territories outside the contiguous 48 states, it is imperative that we discuss the historical significance of these in order to appreciate the culture. Archaeological evidence suggests that humans started migrating to the western part of the US, including Alaska in the 2000 B.C. through the Bering Strait. Due to the geographical proximity, Russia occupied the Alaskan territories until 1867 when US purchased the land. The Japanese held portions of the territory and islands during WWII as well. Hawaii on the other hand was settled by Polynesians for long, giving rise to many mythical scenes and Gods. European settlers discovered the islands and set up commercial routes to far east Asia in the 18th century. Immigrants from Japan, China and southeast Asia flocked to the islands in their canoes in search of fortune in the labor intensive Sugarcane industry. It was included in the US as a separate state in 1959.

Puerto Rico, translated from rich port due to presence of gold in the waters, was discovered by Christopher Columbus in 1400’s. Aboriginal tribes populated the archipelago of Puerto Rico before the European settlers invaded and captured the islands. Through the Spanish-American war of 1898, the islands became the territory of the United States. In order to improve strategic military presence in the Caribbean, United States purchased the US Virgin Islands during WWII from the Denmark which had conquered and settled in the islands (St. Thomas, St. John and St. Croix) in the 17th century. There are a number of other US controlled territories, mostly due to strategic military significance, like American Samoa, Guam, Midway, etc.

Each island or territory has its own gems, but in most cases none of these can be covered in one single trip. For example, Hawaii has four main islands, and it is advisable to cover only one in a single trip. Alaska on the other hand is large, and is difficult to navigate the wilderness even in summer. Follow along for best itinerary ideas. 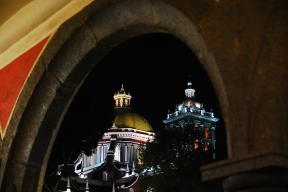